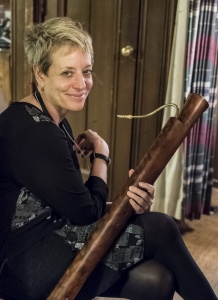 Laura Kuhlman is a recent transplant to Portland, OR from Chicago, Illinois, where she spent many years as a freelance musician. From Bach to Broadway, Laura has enjoyed partnerships with several early music ensembles including the Burgundian Ensemble, Masqued Phoenix, and the Too Early Consort. In 2011, Laura performed with members of Lizodes in Ecuador and in 2012 with members of Piffaro for the Washington DC Revels and in December 2016 with the Portland Revels. Laura has performed with theater orchestras in the Chicago area, including Pheasant Run, Oak Park & River Forest Stage Productions. Laura will share the stage once again with Piffaro in the Washington, DC Revels this coming December 2018.

Laura is the music director for the Portland Recorder Society and the Recorder Orchestra of Oregon, in addition to CGEMR. She is the recent past President of the national American Recorder Society. Along with Juan Carlos Arango and Robert Wiemken, Laura organized the Indiana Early Double Reed Workshop, now in its 18th season and has
taught at the Kalamazoo Recorder Workshop in Kalamzoo, MI, the San Francisco Recorder Workshop in California, Whitewater Early Music Festival in Wisconsin and recently the Vernon Proms Festival in Vernon, BC, Canada.

Laura performs with The Oregon Renaissance Band in Portland. She is the musician scheduler and performer for the English Country Dance community in Portland. She also teaches flute, saxophone, recorder, early double reeds and renaissance bagpipes both at workshops and in her private studio.

Vicki Boeckman is an active and passionate performer of all styles of music. Her career as a professional recorder player has been a highly rewarding journey which has taken her to many exciting places such as Denmark, Sweden, Norway, Germany, Austria, Italy, England, Scotland and British Columbia. She has recorded 15 CDs with various ensembles and loves playing a wide variety of musical styles.

Since settling in Seattle in 2004, Vicki has been a featured soloist with Seattle Baroque Orchestra, Portland Baroque Orchestra, Portland Opera, Medieval Women’s Choir, Gallery Concerts, Philharmonia Northwest Orchestra and the Skagit Symphony. Her Seattle-based chamber trio, Ensemble Electra, with violinist Tekla Cunningham and harpsichordist Jillon Stoppels Dupree are a permanent fixture in the early music scene. Her duo with recorder maker David Ohannesian is a popular addition to the Early Music Guild’s School Outreach Programs, often asked to return to the same schools year after year. Vicki is a two-time recipient of the recorder residency at the Sitka Center for Art and Ecology in Oregon, and a two-time recipient of the Jack Straw Artist Support Program.

Vicki is a pillar of the Seattle recorder community and in demand as a teacher locally and afar, teaching at workshops and seminars across the country and in British Columbia. She was director for the Portland Recorder Society and the Columbia Gorge Early Music Retreat from 2006-2016. Currently she is music director for the Seattle Recorder Society, co-director of the Recorder Orchestra of Puget Sound (ROPS) with Charles Coldwell and Artistic Director for the Port Townsend Early Music Workshop. Vicki adores teaching children as well as adults. She has been on the faculty of the Music Center of the Northwest in Seattle since 2005 as well as having a thriving teaching studio in her home.

Vicki resided in Denmark from 1981-2004. While there she taught at the Royal Danish Academy of Music in Copenhagen for 12 years, and at the Ishøj Municipal School of Music for 23 years. Many of her students are now professionals themselves, either performing or teaching in conservatories in Denmark or around Europe. Her Danish recorder trio Wood’N’Flutes had a fantastic 15 year run performing in castles and churches all over Europe and working with contemporary composers, in addition to doing children’s theater. Vicki loves spending quality time with friends and family, cooking and eating good food, drinking good wines and single malts, walking briskly, and making things grow in the garden.

Gayle Stuwe Neuman, a performer on violin, recorder, sackbutt, and many other instruments, is also a vocalist who has received international acclaim for her renditions of the “Song of Seikilos,” the “Chorus from Orestes,” and others upon the release of Ensemble De Organographia’s CD Music of the Ancient Greeks. Several of the tracks from that recording have also appeared in the Norton Scores Recorded Anthology of Western Music, and numerous films and television programs. She appears in the award-winning film “Buddymoon” directed by Alex Simmons, and recorded music that is heard in the recent remake of Ben-Hur. She composed and arranged music for the 2015 production of “Mary Stuart” for Northwest Classical Theatre. She has performed for audiences in the U.S., Japan, Israel, Turkey, Greece, Canada, Norway, Germany, and for members of the royal family in Jordan. She co-founded and co-directs the Oregon Renaissance Band, now in its 27th season. Gayle is a member of the Trail Band and has played under the baton of Monica Huggett and Ton Koopman. She teaches Recorder, Collegium Musicum and Renaissance Song classes at Portland’s Community Music Center. She has given workshops and presentations at many institutions, including Oberlin Conservatory, Rice University, Cleveland Museum of Art, and the Getty Center. She has built with her husband Phil over 400 early wind and stringed instruments including krummhorns, cornamusen, racketts, and vielles. 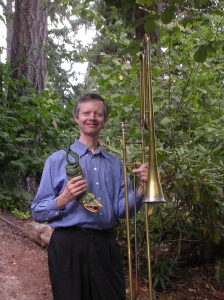 Phil Neuman, a performer on recorder, sackbutt, and numerous other wind and stringed instruments, co-founded and co-directs the Oregon Renaissance Band, which has performed for the Regensburg Early Music Festival, and recorded the CDs Carnevale and Now make we joye. He has produced and recorded seven CDs for Pandourion Records, including French Music of the 14th Century, Music of the Ancient Greeks, and The One Horse Open Sleigh. He appears in the award-winning film “Buddymoon” directed by Alex Simmons, and recorded music on ancient instruments for the recent remake of Ben-Hur. He has written and recorded music for Oregon Public Broadcasting. He has played for audiences on three continents, including performances at several ancient theater sites in Greece. He teaches Recorder, Renaissance Winds, and Loud Band classes at the Community Music Center in Portland. Phil is a member of The Trail Band, has performed under the direction of Christopher Hogwood and Nicholas McGeegan, recorded with the American Bach Soloists, and has played in the Philharmonia Baroque Orchestra, The Chicago Chorale, and the Handel and Haydn Society Orchestra. He has composed, arranged and transcribed over a thousand works for recorder ensemble, brass ensemble, and symphonic wind ensemble, including “Theme and Variations” that won first place in the San Francisco Recorder Composition Competition. He has built with his wife Gayle over 400 early wind and stringed instruments including krummhorns, cornamusen, douçaines and racketts.

Recorder player Rotem Gilbert is a native of Haifa, Israel and a founding member of Ciaramella, an ensemble specializing in music of the 15th and 16th centuries. Ciaramella has performed throughout the United States, in Belgium, Germany, and Israel, and

released a CD on the Naxos Label, and two recordings with Yarlung Records. Their CD Dances on Movable Ground earned five stars by the British magazine Early Music Today and was picked the Editor’s Choice, lauded for its “expressive fluidity and rhythmic vitality”. Rotem was a member of Piffaro (1996-2007), and has appeared with many early music ensembles in the United States and in Europe, most recently with Voices of Music in the Bay Area and Utopia Early Music in Salt Lake City. Rotem recently performed and gave master classes at the Federal University in Juiz de Fora, Brazil for their 30th International Festival for Colonial Brazilian Music and Early Music. Rotem has been featured as a soloist for the Pittsburgh Opera, the LA Opera, Musica Angelica and the Los Angeles Philharmonic. After studies on recorder with Nina Stern at Mannes College of Music in New York, she earned her solo diploma from the Scuola Civica di Musica of Milan where she studied with Pedro Memelsdorff. She earned her doctorate in Early Music performance practice at Case Western Reserve University studying with Ross W. Duffin. Rotem is an Associate Professor of Practice at USC Thornton School of Music, teaching musicology courses in Early Music, Renaissance notation seminars, Renaissance and Baroque Performance Practice and directing Early Music ensembles. She recently led USC students for a summer course in Paris on music, culture and art. Rotem received the 2012 Dean’s Award for Excellence in Teaching at USC and is the joint recipient with Adam Gilbert of Early Music America’s 2014 Thomas Binkley Award for “outstanding achievement in performance and scholarship by the director of a university or college early music ensemble.” She has been a regular faculty member of early music workshops and is the co-director of SFEMS Recorder Workshop in the Bay Area. Rotem can be heard on the Deutsche Grammophon’s Archiv, Passacaille, Musica Americana, Dorian, Naxos and Yarlung labels.

Joan Kimball, artistic co-director and a founding member of Piffaro, The Renaissance Band, has toured and concertized with the ensemble throughout the U.S., Europe, and parts of South America, and has performed with many of the leading early music artists

and ensembles in this country. A specialist in early winds, she plays all manner of double reed instruments, as well as recorders and bagpipes of many sizes and shapes. Joan gave full time to early music performance in 1980 after a number of years as an educator, and still treasures her work with students of all ages. She teaches recorder and early winds to children and adults and organizes Piffaro’s educational programs, planning special outreach projects built around Piffaro’s concert series. In addition, she collaborates with instrument maker Charles Wines on the construction of Medieval and Renaissance bagpipes and is a maker of double reeds for Renaissance shawms, dulcians and capped winds. Joan teaches bagpipe, recorder and double reed classes at summer music workshops and festivals. In addition to her many recordings with Piffaro she can also be heard on Vanguard Classical, Eudora and Vox Amadeus. 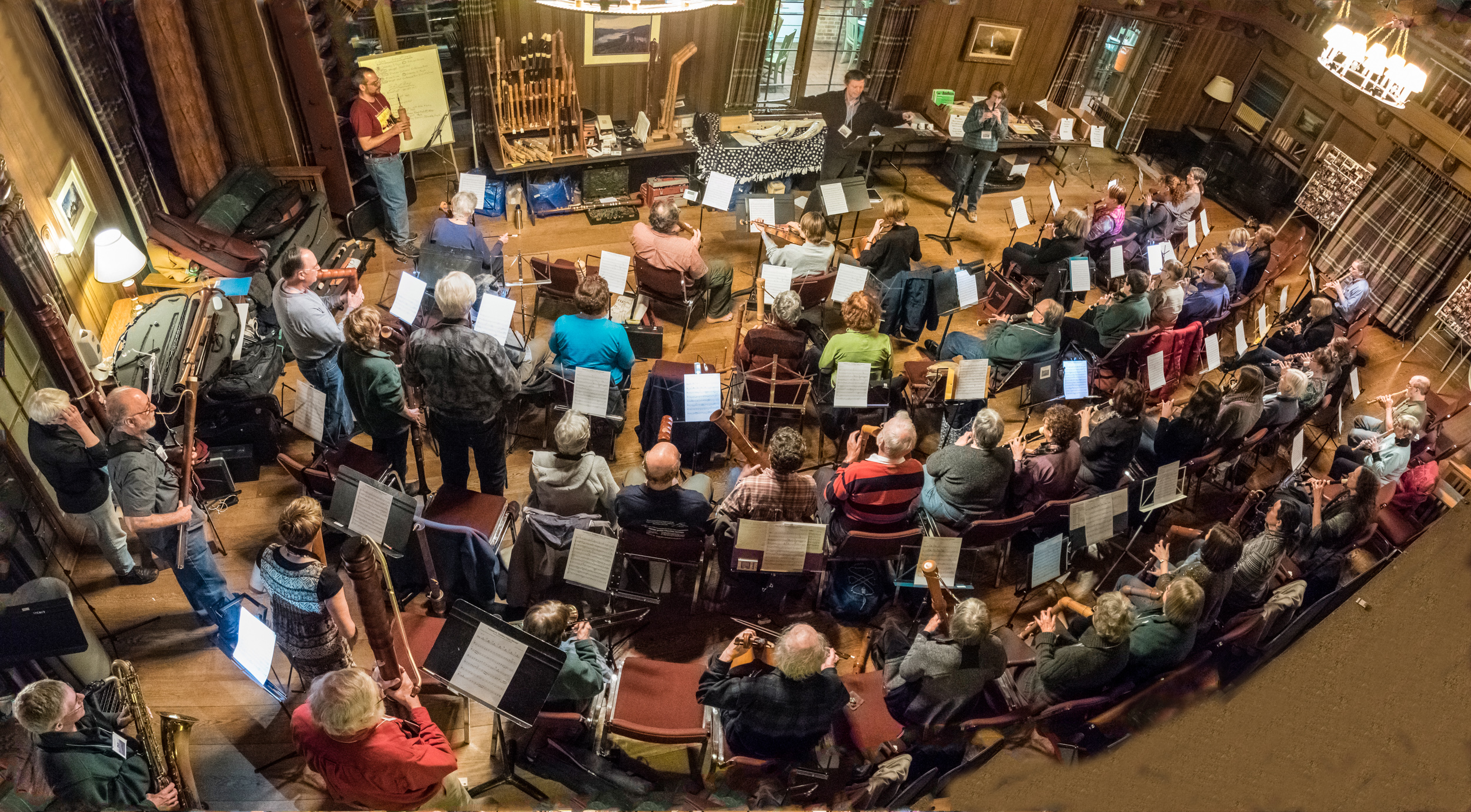 We’re sorry, registration has filled, but you may be placed on the waiting list.

Our February meeting  and playing session will be  held Sunday, February 2th, 2-4 pm at Tabor Space!

The session will be led by Jacob Breedlove. Please arrive early to set up and be ready to play at 2 pm!

Watch this space for the music to play at the February playing session (usually two weeks ahead of time)!

Are you interested in carpooling to attend our playing sessions? Click here to contact us or email us at prs@portlandrecordersociety.org if you need a ride or are able to drive!